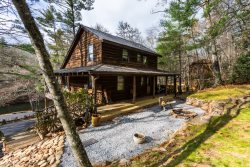 The Edwards Pie Lodge was built in 1931 and was originally named The Wills House or “Big Waters” and was burned but restored. It is one of only 36 structures that Joe Webb built and all of them were built within a 5-mile radius. The home sits on 4 acres of property on beautiful Lake Sequoyah on the Cullasaja River.

The home was purchased in 1971 as a second home for the owners. They were looking for a home in the mountains and a neighbor and friend told them about the quaint town of Highlands, N.C. On their first weekend visit, they put a contract on the home.

It has been loved for almost 50 years by 4 generations and as every family member has said “it is their favorite place in the world”.

Joe Webb Log Cabin History:
In the 1920s and ’30s, Joe Webb (1881-1950) designed and built a handful of singular log cabins and two frame houses near the resort town of Highlands, N.C.  Set amid lush rhododendron and mountain laurel, these rustic dwellings seem to capture the essence of summertime in the Mountain South. Their simple-yet-dignified interiors center on large stone fireplaces; the only decorative flourishes are the whimsical tree-branch tangles used for staircase balustrades and gallery railings.
Webb and his work crew—which included family members—built the homes entirely by hand, without power tools. Instead, the workers used crosscut saws, adzes for corner notching and drawknives to debark the logs, which were local chestnut (already dying off from the blight that would destroy the Appalachian forest’s signature tree) and pine found near the work sites. Cabin-building was not a lucrative business; these same men also made and sold moonshine.
His houses are famous locally for their modernist style elements, slab-sided construction, stack-stone fireplaces and chimneys, and pine ceilings with tongue-and-groove construction, but perhaps most of all for their extensive use of chestnut. The American chestnut tree was meeting its demise by an Asian fungus at the exact time Webb was building his rustic mountain retreats for Highlands’ new class of well-heeled summer residents. Chestnut, which once made up one-quarter of all trees in southern Appalachian forests, was long favored as a building material due to its natural lightness and durability. But as dead old-growth trees suddenly littered the forest floor, it became especially abundant and cheap. Luckily, the wood is slow to decay, which allowed it to be used extensively in building and furniture-making during that time period. Webb used chestnut bark siding (which naturally repelled insects and survives intact on only a couple houses), chestnut built-ins, beautiful wormy chestnut paneling, and exterior walls built from hatchet-formed chestnut logs.
On November 26, 1997 the cabin had an electrical fire at a time when it was unoccupied.
Even though it was deemed as a “total loss” at the time of the fire, the owners worked diligently to restore the approximately 2/3’s of the remaining structure back to its original form and they rebuilt and improved the portion that was destroyed.  They worked with local builder and log cabin specialist; Tommy Chambers and the homeowner’s worked closely with local artists to build custom furniture and lighting to compliment the interior of the cabin.
The Elk in the great room was given to the family by Johnny Myers from Amelia Island. The 2,000 Lb. Elk was harvested in Montana.

The wooden carving over the fireplace in the library, is of Saint Francis of Assisi and was purchased in Clayton Georgia.

The stained-glass Dove; (which represents the Holy Spirit) over the fireplace in the dining room was a custom-made birthday gift from Mrs. Edwards to Mr. Edwards.

The swing on the side porch was custom made for the owners by a master carpenter on St. Simons Island in the mid 1970’s.

There is a fresh water spring at the bottom of the hill which was the water source for the home when Joe Webb built the house. It is still there and the family still loves to drink water from the spring. As a matter of fact, the owners father use to bring empty bottles from home to fill with the water to take back with him.