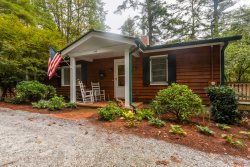 Choice your adventure and explore Highlands, NC with Highland Excursions!


Your guide, Justin Kingsland was born in 1963 in St. Asaph, North Wales. He graduated from Infantry Junior Leaders Battalion military college in 1979 and joined the 2nd Battalion Coldstream. He specialized in arctic mountain warfare and winter survival and was selected for the Special Forces.

Justin left the British Army in the late 1989 and became a commercial helicopter pilot in Los Angeles, California. In 1991, he accepted a leadership position with BMW Automotive as a Regional Manager for the US distributor of luxury cars and motorcycles.

Team building and leadership development are Justin’s highest core values. Throughout his professional career, he has organized, led and facilitated the development of many professional groups. This included automotive dealer advertising groups, motorcycle advertising groups, and a manufacturer’s motorcycle drag bike race team, creating the world’s fastest production drag bike in its class for BMW in 2009. He most enjoys helping independent people move towards interdependence and seeing them network and grow into healthy team players. He is the consummate middleman, eager to assist others to achieve a common goal. Justin Kingsland has built a reputation as a successful leader and agent of change.

In February 2016 Justin moved to Highlands NC with his 6 years old daughter Ashlyn and started Highlands Excursions. He has worked closely with the National Forest Service and obtained a special use permit which enables him to operate as an official expedition and  mountain guide in the Great Smoky Mountain National Forest.

To book an adventure call:
864-373-4022  or email us at [email protected] for available dates.
They are open 7 days a week, year round, all season.  Our Pinzgauer ( Mountain Horse, "Gennie" ) can carry up to 9 passengers comfortably on the roughest roads.